The editor of New York University’s independent student-run newspaper, Washington Square News, pulled an advertisement for National Review editor Rich Lowry’s upcoming book from the paper because exposure to the ad may have “marginalized people of color,” according to a statement released Thursday.

Lowry purchased the ad in order to promote a talk he will deliver Thursday night at NYU on his new book, The Case for Nationalism: How It Made Us Powerful, United, And Free, which will be released on November 5th.

The paper’s business team accepted the ad and charged Lowry for its placement last week. He found out that it would not appear in the paper’s Monday edition only when he saw that his payment had been refunded.

When no explanation was forthcoming, Lowry wrote a post informing National Review readers that his ad, which “invited people to learn why their pre-conceptions about nationalism are incorrect,” had been pulled without justification.

In response, the Washington Square News editor explained that she had unilaterally decided to pull the ad in order to shield “people of color on campus” from exposure to the phrase “Nationalism is a good thing,” which, in keeping with the book’s topic, was placed prominently at the top of the page.

“On Sunday night during our weekly print production of the paper, I decided to pull the ad from the issue. The ad’s pro-nationalist message does not align with the values of our paper, and after much thought, it was my decision to cancel it,” the paper’s editor said. “The word ‘nationalism,’ as it exists in today’s political lexicon, connotes xenophobia and white supremacy, and printing it in large letters on the back of our paper would have marginalized people of color on our campus and our staff. I prioritized the sensibilities and trust of our audience over the ad revenue, and I stand by my decision.” 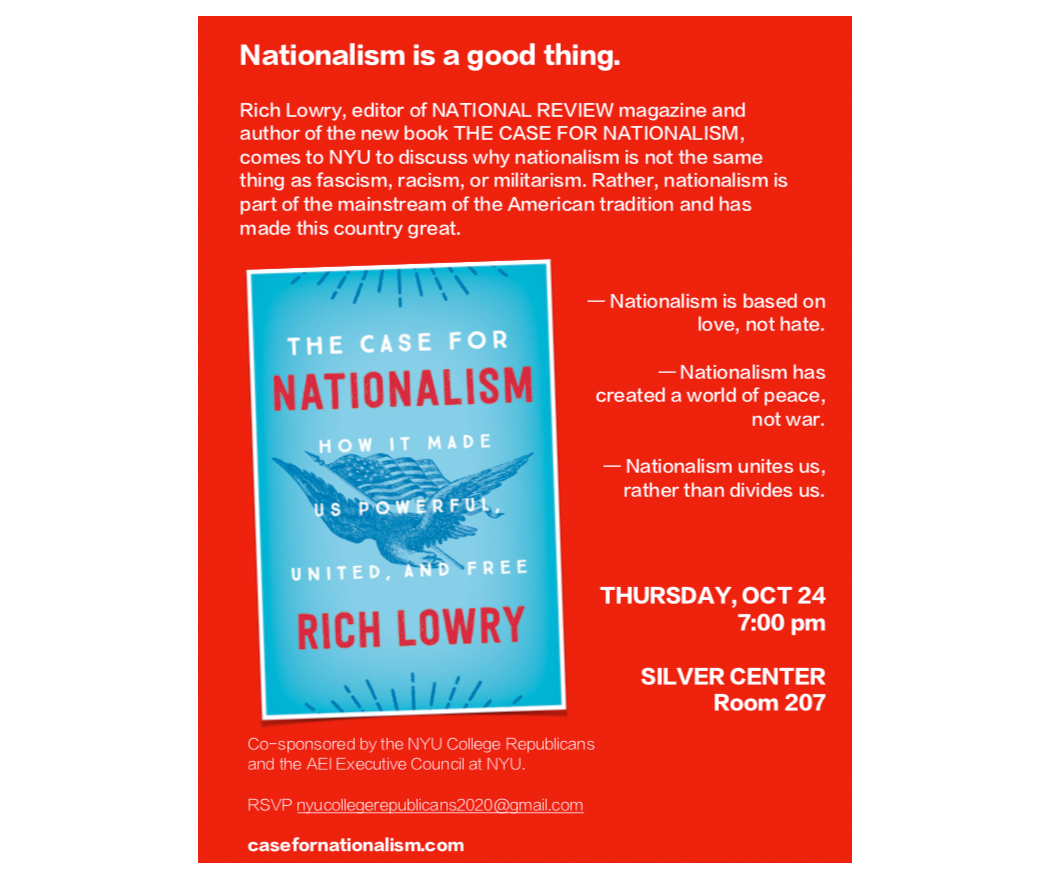 Lowry responded to the statement on Twitter Thursday afternoon, arguing that the editor’s contention that nationalism is inherently linked to “xenophobia and white supremacy” represents a “lazy misunderstanding” and, ironically, illustrates the book’s relevance to the contemporary political environment.

One wonders if anyone at NYU is allowed to mention that Alexander Hamilton, Henry Clay, Abraham Lincoln, and TR were all nationalists, or if this would be too triggering

This poisonous and lazy misunderstanding of the word nationalism–and the idea behind it–is why I wrote the book, and why people inclined to reflexively reject it should pause and actually listen

Elsewhere in his statement, the editor explained that her decision to pull the ad was made without consultation with the administration or anyone else — and added that ads are only retroactively pulled under the most extreme circumstances.

“Removing ads from the paper last minute is not a standard practice — in fact, it almost never happens,” she said. “I made a judgment call while my colleagues on the business side of the paper were asleep, and we have put practices in place to ensure that an ad of this nature does not again get so far along in the process before being canceled.”