From my profile of Moran back in 2003, shortly after he declared that the U.S. would go to war in Iraq because of the “strong support of the Jewish community for this war”:

In May 2001, Lloyd Grove, “Reliable Source” columnist for the Washington Post, reported that Moran’s house was the site of “a ruckus that a witness described as ‘something out of a Jerry Springer episode.’” According to Grove’s account, two female friends of Moran visited the recently divorced congressman and were surprised to find the other, and after screaming and door slamming, Moran had one of the women “by the arm, trying to get her out of the house.” Moran’s chief of staff, Paul Reagan, explained: “It was just two very good friends who came to give him birthday presents and were surprised that the other one was there.”

In June 2000, Moran’s wife, Mary, called police to their home claiming the congressman pushed her. Moran told police he pushed her in self-defense when she came toward him, but Mrs. Moran disputed that. There was no evidence of assault, and charges weren’t filed. They divorced shortly after the incident.

In April 2000, Moran said he was threatened by an eight-year-old boy who tried to take the congressman’s car keys by pretending he had a gun. In front of witnesses, Moran angrily carried the boy from a parking lot to a recreation center, where police interviewed both. No charges were filed against the boy or Moran.

I hope his family isn’t too upset. 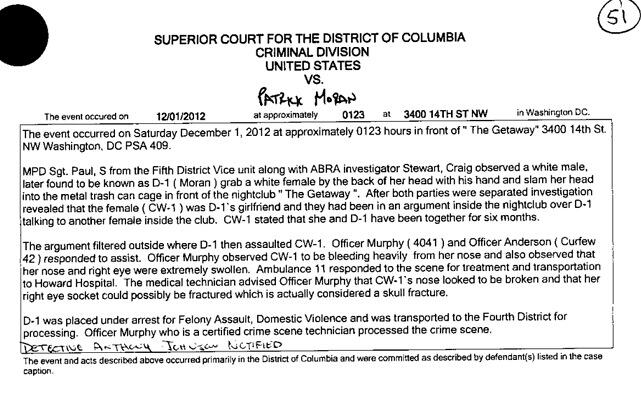 Jim Moran is a bad man who kept getting reelected by wide margins because he had a “D” after his name. Here’s the entirety of the Washington Post editorial board’s endorsement of Moran back in 2010:

Mr. Moran, a Democrat who has long represented the heavily Democratic 8th District, has embarrassed himself, and his constituents, with ill-considered comments in the past. But he is conscientious and constituent-oriented, and his opposition in this election, as in past contests, is weak.

“He’s the embarrassment to northern Virginia who has earned our trust!”

Moran embarrassed himself and his consituents, and the Post editors embarrassed themselves by excusing that embarrassment. Good riddance.

UPDATE: Andrew Clark of the NRCC writes in:

This is becoming a daily event. On Monday, Pelosi’s top attack dog George Miller announced his retirement. Yesterday, vulnerable Democrat Bill Owens sensed the coming ObamaCare winds and decided to retire instead of face the voters as well. Pelosi has lost Moran AND Miller. Not only is the Democrats’ path to returning to the majority looking increasingly impassable, but Pelosi’s loyal band of merry men are already folding their hands.

Yes, but are we sure losing Moran doesn’t qualify as “addition by subtraction”?

ANOTHER UPDATE: Meet Micah Edmond, a Republican throwing his hat into the ring for the open-seat race.

Thoughts on the 1776 Commission and Its Report

Thoughts on the 1776 Commission and Its Report

Victor Davis Hanson
Why the controversy? Yes, America is imperfect. And also great.

Mairead McArdle
‘I think, yesterday in particular, the president's language and rhetoric crossed the line and it was reckless,’ Cruz said.

Vaccine Vexation for the Biden Administration

Vaccine Vexation for the Biden Administration