This photo, on the Facebook page of the Free Syrian Army, depicts Obama as Captain America, waiting for Congress to unchain him to take on Assad, spraying poison gas on people: 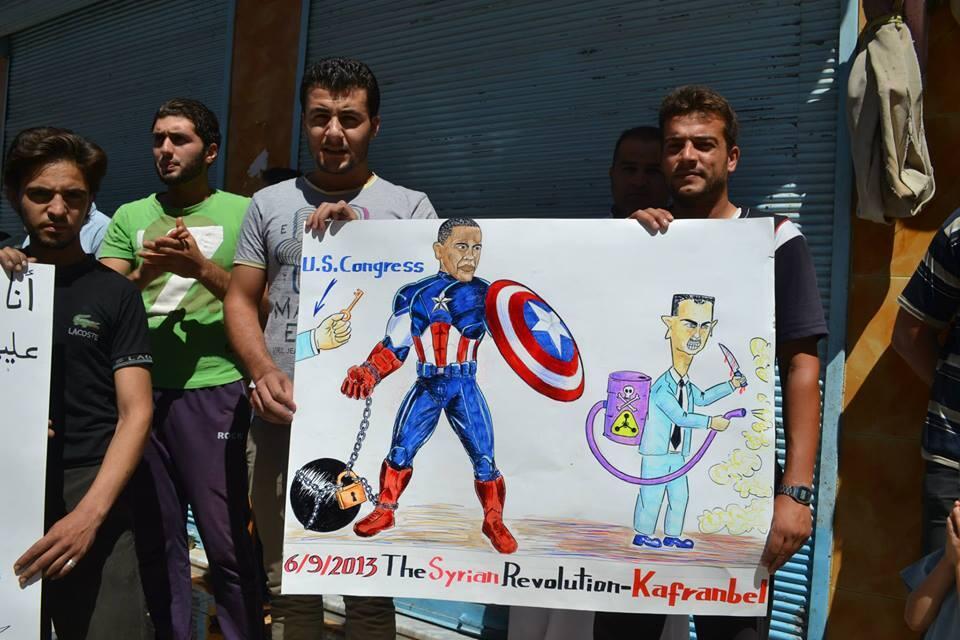 The administration must be glad to see somebody finds the president’s Syria policy heroic.

Of course, not every photo on every Facebook page of every Syrian faction is so cheery. NBC News spotlighted this photo on the page of

the “Al-Aqsa Islamic Brigades,” a small armed Sunni rebel faction fighting with the Free Syrian Army, the main umbrella military organization of the opposition forces. Two other photos posted on the group’s page feature the widely recognized black flag of the al Qaeda in Iraq terrorist group, which operates freely in Syria.

Yes, that appears to be the U.S. Capitol building burning in the background.

The football legend waded into the heated discourse around Floyd's death just one week after saying he wanted politics out of sports.
Brittany Bernstein

Rand Paul: Biden Should ‘Burn His Mask’ on TV to Encourage Americans to Get Vaccinated

The shooting came on the same day a jury convicted Minneapolis police officer Derek Chauvin in the killing of George Floyd.
Brittany Bernstein

No, Modern Policing Did Not Originate with Slavery

In a Wednesday afternoon tweet that was later deleted, the basketball star posted a photo of the officer.
Caroline Downey

Most Democratic senators refuse to take the idea off the table.
John McCormack

The Editors
The police power to use necessary force, which must necessarily be superior force, never justifies excessive force.

Tobias Hoonhout
They won’t let the body-camera footage stand in the way of their narrative.