Some Reassurance for COVID-Anxious Americans

COVID Vaccine for Kids Should Force Schools to Rethink Masks

Happy Pi Day! Making the click-through worthwhile: The insufferable tidal wave of Betomania is coming, why the college-admissions scandal is strangely reassuring, a horrifying statistic illustrating the extent of our partisan political rage, and a window of opportunity closing . . .

The magazine covers and posters . . . 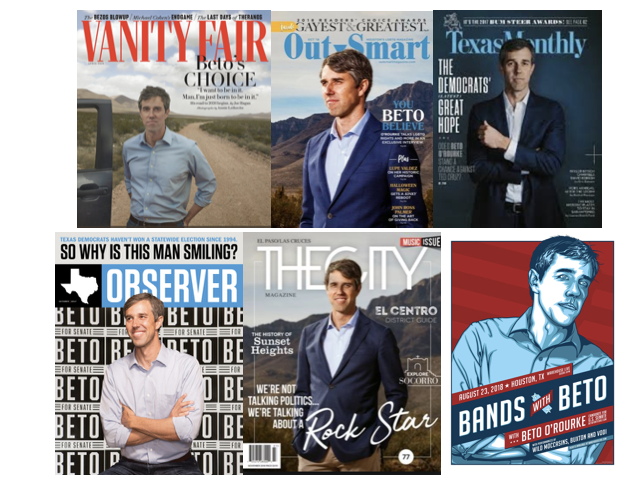 . . . the gushing media profiles, the adoring interviews with late-night hosts, the hagiographic documentary, the t-shirts, the celebrity endorsements and appearances, the social-media mania, the volunteers creating their own designs for posters and logos and campaign imagery . . .  we’ll probably get the flash mobs from 2018 restarted, too.

Except the last time we did this, all of the hype and hoopla was for a once-obscure slender guy in his mid-to-late 40s who had been in the legislature for a while, hadn’t been able to get many pieces of legislation passed whether his party was in the majority or minority, who boasted about his across-the-aisle friendships but who had never really defied his party’s orthodoxy, who had little or no executive experience, who could do mundane tasks such as driving or sweating and have them described by political reporters like he was completing the 12 labors of Hercules, who was full of charisma but vague enough in his answers and agenda to be a blank slate to everyone looking for an ideal candidate. Same script, slightly different leading man.

We’re doing all of the Obamamania stuff again, except this time with a white guy from Texas. It’s all starting up again: the retro hipster t-shirts, the bracelets on Etsy, the votive candles.

Once the progressive-media industrial complex decides that some guy is a hero, it’s difficult to derail that train. They’re convinced they can conjure that courageous and intrepid narrative into existence through sheer willpower, facts be darned. O’Rourke’s recent defeat is just reinterpreted as a historic victory, a key turning point, a promise of things to come. There’s a paperback book of photography from Beto O’Rourke’s 2018 Senate campaign: “When I first showed up to see Beto OʼRourke he had 63,500 followers on Twitter. Eleven months later on election day, he broke the 900,000 mark. And it’s all because he showed up and left us all with a feeling that doesn’t go away — hope.”

This presidential campaign is a rerun.

What will rankle conservatives — and perhaps have the Trump campaign licking its chops — is that if Beto O’Rourke had an “R” after his name instead of a “D,” the world would know a lot more about the less-appealing aspects of his life story. Not just the DUI, but his private-sector development career that used eminent domain and gentrified poor Latino neighborhoods, and marrying into a billionaire’s family. The image celebrated in these gushing profiles doesn’t match the reality. He was never in the military but talked about veterans’ issues so much that some people think he was. He’s not Latino, but his “rise fuels hope for Latino Democrats.” He’s the outsider who was in elected office from 2005 to 2018. He’s the modest everyman with a net worth of $9 million. He’s a boarding-school-attending son of a judge who escaped serious consequence for not just the DUI but also burglary charges.

Is Beto O’Rourke’s skateboarding “cool”? Or does a 46-year-old aspiring commander-in-chief look silly doing it in the parking lot of a Whataburger? Does wearing a pig mask and onesie while playing guitar onstage in 2003 at age 31 reflect O’Rourke’s creative, artistic, rebellious spirit? Or does he just look like a guy who really wanted to be a rock star, and is settling for being a political rock star?

An observation about the reaction to yesterday’s Jolt about the celebrity college-admissions scandal: An enormous amount of people who are generally happy and successful in life still have some lingering resentment about how the college-admissions process worked out for them. Some folks who didn’t go to college feel that they didn’t get a fair chance to pursue that option. Some folks who did go to college felt like they weren’t given fair consideration by another college they preferred — or they were accepted by some school that they would have loved but couldn’t afford it. Some folks who went to a good school feel like they could have thrived in a top school if given a chance, and almost everybody has run into an employer who overvalued which school you attended. Almost everybody has run into at least one idiot who got into one of the top schools, and frequently reminded everyone about it.

In other words, a lot of people whose lives have turned out just fine feel like early on they were unfairly denied an opportunity at something. To hear that some shady wealthy folks managed to obtain admission, when that was denied to so many of the rest us, could be infuriating . . . or somewhat reassuring. The scandal convinces us that when we were rejected in the past, those in authority didn’t assess us accurately or fairly. Our acceptance letter was tossed aside because some Hollywood starlet threw cash at the admissions office so that she could brag to the neighbors that her empty-headed progeny had gotten into a good school.

Like the Independent Women’s Forum’s Charlotte Hays, I find this story strangely delicious. It’s got everything: elitism, academia, Hollywood, values, parenting, wealth, power, class distinctions, a bit of political-correctness madness in the affirmative action angle . . . It’s like the Fyre Festival for snobs.

As Kyle Smith observed, a degree from a good school isn’t necessarily about earning power or preparation for the workplace. It’s about the ensuing social network and lifelong reputation. “If your goal is to enhance your sense of superiority over your fellow man, a Yale education is an excellent way to do that. Unlike a Porsche or a Cartier, it is with you always. You can’t lose it and it can’t be stolen.”

How bad is partisan rage? Really, really bad, as David French reveals: “We hear quite a bit about ‘dehumanizing rhetoric’ in American public life. Well, it appears that tens of millions of Americans now have dehumanizing beliefs. ‘One out of five Republicans and Democrats agree with the statement that their political adversaries ‘lack the traits to be considered fully human — they behave like animals.’’”

If more people would crack a history book once in a while, they might realize where rhetoric like “My adversaries aren’t really fully human” leads.

If you’ve been thinking about attending the National Review Ideas Summit, the window of opportunity is closing fast!

Representative Valoree Swanson, the bill’s sponsor, said earlier this month that it would protect women and girls from unfair competition.

Fifty Years of Chinese Subversion at the U.N.

Beijing’s corruption of the organization can be seen everywhere.
Jimmy Quinn

Greene has now accrued $5,500 in fines this year for refusing to wear a mask on the House floor.
Brittany Bernstein

Smith alleged earlier this month that a boy wearing a skirt assaulted his daughter in a Loudoun school.
Zachary Evans

The Virginia Democrat is at it again — and we shouldn’t be surprised.
Dan McLaughlin

De Blasio announced that all city workers must receive at least one shot by Friday or go on unpaid leave.
Caroline Downey